Is Verde just a game of 'Call my bluff'? 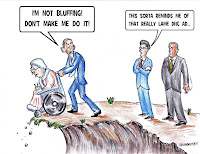 As the date for bids for Lloyds Banking Group's Verde continues to be extended and still there is only one bid on the table - a question that springs to mind is whether a very smart game of the TV panel show 'Call my Bluff' is being played by Antonio Horta-Osorio, the CEO of Lloyds Banking Group.
There is only one bid on the table at the moment and that is from Lord Levene's NBNK. The price being offered is considerably below what the government and Lloyds Banking Group shareholders were wanting or expecting. NBNK has also been allowed (the NBNK CEO, Gary Hoffman, was prevented from bidding for Northern Rock for twelve months after he'd left his post as its CEO) into the bidding for Northern Rock early. A move on the part of Northern Rock probably to create more competition and, hopefully, push up the price for the Newcastle-based bank. From an NBNK perspective combining both the Northern Rock business with the Verde business would ease some of the working capital concerns about acquiring Verde, since Northern Rock is deposit heavy and loans light, whereas Verde is the other way round, and it would provide NBNK with a platform to migrate Verde onto. It would also make NBNK even more of a competitor to the established banks with over 400 branches. However it would require NBNK to raise even more capital from its investors, complicates the acquisition very significantly and increases the complexity of the integration execution. Even if NBNK were to acquire Northern Rock the price being offered to Lloyds Banking Group or Verde may not be sufficient for shareholders.
This leaves the other contenders for Verde that have not put in a bid yet. Hugh Osmond, the pizza restaurants to pubs operators entrepreneur best known for Pizza Express and for paying over the odds for the Pearl Insurance business, and his Sun Capital Partners business are allegedly looking at ways to re-shape the Verde deal so that it is less capital intensive. This could mean that the pace at which the Verde accounts are transferred to the acquirer is slowed down or indeed reduced so that the funding gap is not so great. The challenge for any bid from Sun Capital Partners will be whether it is seen as enough of a 'strong challenger bank' to meet the ICB requirements for whoever acquires Verde.

The third contender is the Co-operative. With no shareholders to call upon for capital, the Co-Op would have to go to the markets to raise the capital, which is even more challenging for a mutual than a equity-based company. With liquidity in the markets extraordinarily difficult it is no suprise that there has been no bid from the Co-Op yet.

With question marks over all three contenders the final option that Antonio Horta-Osorio has is to float Verde, which has been suggested/threatened before. But how realistic is that given the markets going cold on investing in banks and capital being hard to raise. If the float could be got away would it be at an acceptable price?

Lloyds Banking Group has until 2013 to dispose of Verde, but Antonio Horta-Osorio has said that he wants clarity by the end of this year. Is this in anyone's best interests given the state of the prices for banks. Or is this all part of the elaborate game of 'Call my bluff' where having gone through both the sales and the flotation process Antonio Horta-Osorio can turn to the regulators and say that he has tried to do everything possible to meet their requirements to dispose of Verde, but there were no viable buyers, so can't I just keep them?

Update: The game has got even more interesting with Antonio going off on sick leave for the rest of the year. Now where does that leave Verde in the meantime, with an acting CEO with no vested interest in the long term future of Lloyds Banking Group?
﻿
Posted by Jonathan Charley at 14:48 No comments:

HSBC goes back to its roots

HSBC announced its return to its roots as a bank that supports international trade in the strategy announcement on May 11th. Stuart Gulliver, the new CEO and former investment banker, has firmly changed the emphasis back to becoming 'the leading international bank concentrating on Commercial and Wholesale banking in globally connected markets'.

Whilst the words may be modern, this is what the bank was first set up for in Hong Kong in 1865. Supporting international trade alongside the Taipan at Jardines. 'globally connected markets' are the twenty first century words for what is essentially trade routes, though expanded beyond commodities and goods to include money. So when you look at the US and Mexico or Germany and Turkey, as well as the large amount of trade flowing, you see large quantities of money flowing across borders sent by entrepreneurial immigrants back to their families, the strategic value of being in these geographies makes abundant sense.

'Becoming the world's leading international private bank' is also a return to the original roots. Support the international trading companies and support their owners - again what the original HSBC was set up to do for the taipans living on The Peak. In addition with the focus on Wealth Management HSBC is ensuring that as the entrepreneurs acquire their wealth there is a route to climb up to the exclusivity of the Private Bank.

The real change of focus is on 'limiting retail banking to those markets where we can achieve profitable scale', but who can argue with the cold logic of that? What it does mean is that questions are undoubtedly being asked as to whether the use of the strapline that has been so successful and has won so many awards, 'The World's local bank',  will still be valid, unless of course your definition of 'the world' is restricted to the number of focus countries, considerably less than the 80+ countries that HSBC currently operates in.

However it is not all about withdrawal. In Australia HSBC has opened its 31st retail branch as it builds its presence there. Whilst there is an increasingly large and affluent Asian population which HSBC will be attractive to it is difficult to understand how this fits in with HSBC's strategy to focus on markets where it can grow a significant presence given the dominance of the 'Four Pillars' - Nab, CBA, ANZ and Westpac in Australia.

HSBC has clearly made some diversions from its original path along the 146 years that it has been running, not least of all the move into the subprime market with the acquisition of Household in the US (the remains of which is now subject to review and may results in the selling of all or part of the cards and retail banking businesses), but it is to be welcomed the statement of intent to move to a 21st century version of what it was originally set up for.

A new type of CIO is required for today's banks

All the signs have been there for some time. Cameron Clyne, CEO of NAB, talking of NAB Europe dragging down the results of the Group, Lynne Peacock, CEO of Europe deciding to 'retire' just as NAB were claiming to be interested in the Lloyds Banking Group branches. Lynne Peacock, the CEO who had tirelessly changed the image of both Yorkshire Bank and Clydesdale Bank, built a real contender for the SME banking market with some really innovative approaches would hardly 'retire' if NAB was committed to take on the Lloyds Banking Group 632 branches, Intelligent Finance and Cheltenham & Gloucester would she? So NAB expressed an interest in the Lloyds Banking Group branches - wouldn't any self-respecting competitor like to have a look under the covers if they had a chance?

Looking at the situation from Melbourne, the logic about exiting the UK is clear for all to see. As the UK Government goes out of its way to make it more expensive and less profitable to operate as a retail bank, with the situation only deteriorating with the publication of the Independent Commission on Banking (ICB) recommendations, banks across Europe seeing their valuations plummet and the Euro environment only getting worse, when a well-funded organisation comes along and asks to buy your business, you'd have to be mad not to consider it, take the money and run back to Australia.

So if the logic is there for NAB is it there for NBNK? Certainly on paper there is sense to it. Acquiring the NAB businesses would give NBNK the advantage of no longer being seen as a new entrant which should reduce both the cost of capital and the amount that has to be retained. The acquisition of NAB should also reduce the funding gap (estimated to be £30bn) between the loans being sold and the deposits/current account balances. It would also give NBNK a set of infrastructure and platforms to migrate the Lloyds Banking branches and brands onto as well as giving it an additional 340 branches. It would also give NBNK an established FSA- approved team (though that could also be bought from Lloyds Banking Group).

Where the concern should be for investors in NBNK is the execution risk. The separation of the disposal from Lloyds Banking Group is undoubtedly one of the most, if not the most, complicated de-mergers to execute on in Europe. Separating it and leaving it still running on a copy of the Lloyds systems and infrastructure is difficult enough, merging it into the NAB infrastructure adds even greater complexity. That assumes that the NAB infrastructure is worth merging into given that NAB Europe has been starved of investment for many, many years. The increase in deal risk by bringing NAB into the mix for NBNK can't be underestimated, however it can be done, it is just a question of whether it should be. The emerging story of the largest de-merger in UK banking continues.

Update 04/10. Despite having suspended the NBNK shares while conversations were underway, the deal has fallen apart. The NAB Finance Director made it clear that with bank shares prices at the bottom and with uncertainty around regulation it would be a disservice to shareholders to sell the UK operation at this time. He reiterated the NAB strategy for the UK being that of organic growth. The cynics could have interpreted this as trying to negotiate the deal price up, however that doesn't appear to be the case, which leaves NBNK asking the question is NBNK on its own going to be sufficient to meet the requirements of the ICB that Lloyds Banking Group sell to a 'significant contender'? See  http://www.itsafinancialworld.net/2011/09/is-nbnk-alone-going-to-be-enough-for.html
Posted by Jonathan Charley at 08:21 1 comment: