The World is more than enough for western banks and insurers

This fundamental shift in strategy by HSBC announced last year by Stuart Gulliver represents a general trend across the Financial Services sector away from world domination or 'everything everywhere'  to a strategy far more spreadsheet driven, where decisions are taken on the basis of whether  in a particularly country a dominant market position can be taken and, if not, either not entering or withdrawing if already there. HSBC is not alone in this, Aviva has announced the sale of its operations in the Czech Republic, Romania and Hungary to Met Life.

How much of these strategies are driven by the need to rebuild balance sheets following the financial crash and the imposition of regulations, such as Basel III, Solvency II and the UK's Independent Commission on Banking Report,  requiring far higher levels of capital to be held, or the need to meet shareholder's short term needs for a return on capital versus a lack of pioneering, entrepreneurial, long-term vision will only become clear in retrospect. Is it yet a further sign of the decline of the mature western economies? It  certainly not the strategy being adopted by the emerging economies such as China with its long term investments into Africa, or even Australia with the likes of ANZ making strategic investments into Asia.

The latest announcement from HSBC will certainly not be its last. The ramifications of the financial crisis continue to reverberate across the globe.
Posted by Jonathan Charley at 13:52 1 comment:

Michel Barnier, the silver-haired Frenchman, spoke to The City in the ancient Guildhall in London. This talk, he will have known, was not to a friendly audience. Like so many of his fellow countrymen's leaders, the talk took the form of an academic lecture with the audience being students who really didn't understand the importance and the point of what he was saying. Very early on in his talk he nailed his flag to the mast with the statement that monetary union without economic union isn't possible and that the EU had come to that conclusion ten years too late. (It was just a shame that the proponents of european monetary union hadn't been listening to the many economists who at the time had said that to bring together countries into a single currency where their economies were developing at different paces was madness. You didn't need to have a Ph.D in economics to work that out!).

Platitudes were said to calm the hostile crowd - the UK needs to be in the heart of Europe/Europe needs the UK and the UK needs Europe. He even went as far to say 'There is no plot to undermine the City'.

During the question and answer session he abandoned this argument when he had been challenged by a questionner that there was an industry that had received state bail outs for the last forty years and would he now introduce an agriculture tax? Needless to say this question was ducked and he complained why whenever he came to London did the question of agriculture always come up? (It couldn't be anything to do with Britain being the major contributor to the Common Agriculture Policy could it?). His argument first shifted to the point that a transactions tax was not novel, that Hong Kong had one (and much lower other taxes) and the US had one too. He also argued that France, Spain and Germany were strongly supportive of the tax (well they would be as they will hardly pay any). In a final act of desperation he argued that public opinion was that bankers were paid too much and that this opinion was the driving force for the tax and that this 'modest tax' (even more modest when you don't have to pay it and your competitors do) should be seen as sending a signal to the bankers.

With that, students educated, the EU Commissioner left The Guildhall to go to his next important meeting.
Posted by Jonathan Charley at 08:48 No comments:

Customers love the banks who charge them the most! 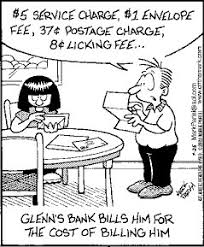 In a very interesting study by the consumer magazine Which? it turns out that the two most expensive financial services organisations to have an overdraft with are First Direct and Nationwide Building Society. These two organisations also have the distinction to have two of the highest customer satisfaction and customer advocacy scores amongst all the banks. Two conclusions could be drawn from this. Firstly that customers want more than anything to have good service and that they are prepared to pay for it. This would be good news for the banks and particularly the alternatives to the Big Five such as Virgin Money and Metro Bank who want to differentiate themselves on customer service, as it would be yet another proof point that good customer service can lead to higher profits. The other conclusion, and the one that Which? draws to is that most customers don't understand the fees that the bank charges them and therefore don't have a basis to compare fees between banks. Or simply that they don't care.

The Which? report comes on the back of a study by PwC into digital banking that comes to the conclusion that customers will be prepared to pay for digital services and that digital banking will becoming the dominant way that customers bank by 2015. Whilst this may be the case, as less and less customers use branches and less frequently the cost of branch banking will soar. This will either result in significant branch closures and the pressure to introduce differentiated pricing significantly increase, whereby the cost of banking in the branch will become higher than online. This will naturally impact those least able to afford it. Of course the banks have tried this before with the brave trying to introduce charges for using a teller, but rapidly withdrawing this when the competition didn't follow suit. However with the introduction of new regulation, the requirement to hold greater levels of capital and increasing demand from consumer groups, such as Which?, for greater transparency around banking fees inevitably the days of so-called 'free' banking are numbered.
Posted by Jonathan Charley at 09:00 5 comments:

What started as a trickle of banking and financial services executives choosing to leave the UK Banking industry has become a flood over 2011. Whilst many of the public and bank-haters may think that this should be the subject of rejoicing, there has been a very serious loss of talent and many years of experience that has left the UK banking industry or gone abroad. The list of retail banking executives who have exited UK banking include:

There has also been a flood of Banking IT executives who have chosen a different career or a different geoegraphy. The list includes:
In addition there are also the likes of Marion King, CEO of VocaLink (the banking payments processor) who has also left the Financial Services industry.

Such a wave of departures, particularly of so many women, can hardly be good for the UK Financial Industry. It also raises the question of why so many people would take such a big step ( a number of them deciding to move halfway round the world)? Certainly the likes of Vince Cable have rallied the public to despise bankers and made it increasingly unattractive to work for a bank through both financial penalties and through continual attacks on their integrity. The increases in the tax regime has also meant that countries such as Australia, where traditionally the tax system was, at best, comparable to the UK, has now become far more attractive. Along with the Four Pillars in Australia remaining independent of government ownership and growing profitably there are many reasons for executives wanting to go to Australia.

The tax regimes and the growing banking sectors in Singapore and Hong Kong make these cities even more attractive to bankers who want to get on with the job of providing banking services to customers without unnecessary scrutiny and raiding of the wallet by governments.

It is highly likely that this won't be the end of the exodus from the industry. The implementation of the ICB recommendations will continue to make the UK banking industry an unattractive place to work, particularly for those with the freedom to work elsewhere. This can only be good for other countries and will, in the long term, cost the UK financial services sector dearly.
Posted by Jonathan Charley at 11:23 1 comment: