The latest results from TSB have demonstrated that it is possible for a bank spawned from a global retail bank to be a challenger in the market. With National Australia keen to get rid of its northern hemisphere business, Nab UK consisting of the Clydesdale and Yorkshire brands, could this business be the base upon which a challenger bank is built?


A history of innovation


There have been several attempts to make Clydesdale/Yorkshire challenger brands particularly under the leadership of former Woolwich Building Society executives John Stewart and Lynne Peacock. After all they were the first people to introduce the concept of speed dating for SME customers whereby customers could meet other customers in the bank’s business centres with a view to starting a new business to business relationship.


Before that in the first internet boom it was Clydesdale Bank that launched Kiboodle a b2b portal for customers to buy and sell products using an online catalogue.


Lynne Peacock also tried to invigorate the bank and take on the Big 4 banks in the SME sector by opening up new banking centres particularly in London and the South East. That may be where there is the most money but it is also where there is the most banking competition. Looser lending criteria in order to build market share has been a major contributor to the current problems that Nab’s UK business has with major writedowns on loans made at that time.


What would it take to become a challenger?


So if National Australia has failed to make its UK operations a significant challenger to the now Big 5 banks (HSBC, Barclays, Lloyds Banking Group, RBS, Santander) what would it take to change that?


What Yorkshire Bank and Clydesdale Bank require to become significant challengers to the major banks would be significant investments in digital and core banking to deliver both the sort of customer experience offer the propositions that will attract customers of the Big 5 Banks to switch to them. The banks need to become significantly more efficient and that can only be brought about by investing heavily in automation.


Clydesdale Group is expected to be floated, or preferably sold, in either in 2015 or 2016. What will any purchaser of equity or the business actually be getting?


What do Yorkshire Bank and Clydesdale Bank bring?


Yorkshire Bank and Clydesdale Bank are very strong brands with a high level of customer loyalty. According to Yorkshiremen Yorkshire is God’s country and anything from Yorkshire is better than from anywhere else. That loyalty by Yorkshiremen to the bank extends way beyond Yorkshire. Maximising the value of that brand and the pride in Yorkshire could be key to future success.


The Clydesdale brand is equally strong in Scotland and particularly after the nationalisation of both RBS and Halifax Bank of Scotland (through being acquired by Lloyds Banking Group). Should another referendum on the independence of Scotland result in a ‘Yes’ vote then Clydesdale Bank could become the only bank headquartered in Scotland which could attract a lot more Scottish customers post independence.


Between them Clydesdale and Yorkshire operate 298 retail branches, 42 business and private banking centres mainly in Scotland and the north of England as well as having online operations.  That is comparable to the 316 branches that the still to be launched Williams and Glyn Bank (to be spun out of RBS) will have.


Clydesdale bank is the official issuer of Scottish banknotes and 50% of the currency in circulation in Scotland has been issued by the bank and has the brand on them. No other bank in the UK has their customers reminded of them every time they spend money. Clydesdale is also the first bank in the UK to issue plastic bank notes.


With loan balances in excess of £27bn, deposit balances of £23bn the two banks are comparable  in size and efficiency with Virgin Money.


Prior to the offer to buy TSB by Sabadell it had been rumoured that TSB might have been interested in acquiring the business. However one of the stumbling blocks was that there was a significant overlap in branches in Scotland and that would significantly reduce the value to TSB of the businesses.


A merger of Nab UK and Virgin Money would not make sense given the significant overlap of their branch locations even though the combination would build a challenger with sufficient critical mass of customers and assets to start impacting the Big 5 banks. Neither Virgin Money nor Nab UK have a suitable banking platform to build a challenger bank on so there  would need to be a very significant investment required to get the efficiencies and customer experience to the level required to challenge the big banks. Virgin Money has a similar cost:income ratio to Yorkshire and Clydesdale. The level of investment required and the payback period are likely to put off the existing investors in Virgin Money.


An argument could be made for Santander to acquire the business as it would significantly boost their presence in Scotland and the North and it has the technology platform in Partenon that it could migrate Nab UK onto, having already done this for Abbey National, Bradford & Bingley and Alliance & Leicester. However Santander likes to be a distress purchaser and never likes to pay over the odds. In addition two of the core assets of Nab UK the Yorkshire and Clydesdale brands would not be of value to Santander and the subsequent re-branding to Santander could lead to a significant loss of customers loyal to the Yorkshire and Clydesdale brands. All of this makes it unlikely that Santander will want to acquire the business at a price that Nab is prepared to accept.


A question then would be whether a foreign investor could be interested in acquiring the businesses off Nab. Given that Abbey was acquired by Santander, TSB will most likely be acquired by Sabadell then the large global Spanish bank BBVA could be a contender. With its focus on being both a bank and a software business and its recent acquisition of Simple, the US digital bank, then it would be surprising if they didn’t consider this as their opportunity to get into the UK retail banking market.


These are all questions that the incoming CEO for the Nab UK business, former AIB CEO David Duffy, will have to address as he prepares the business for IPO and potential disposal.

Posted by Jonathan Charley at 14:48 No comments:

Why HSBC should relocate its Head Office outside the UK 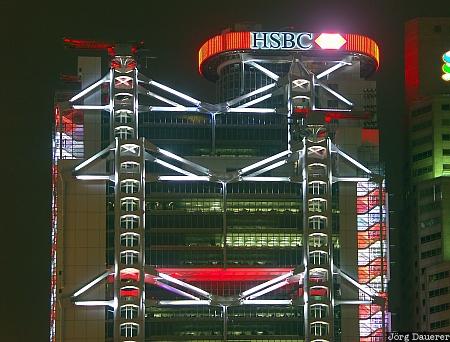 While the question is usually posed as will HSBC move its headquarters from London the question should be why wouldn’t they?
Though it is continuing a process of reducing its global presence (with the businesses in Brazil  and Turkey likely to be the next two to go), HSBC is still a global business. The UK business, particularly the retail bank) is a decreasingly significant contributor to group profits. The logic of the UK being the largest part of HSBC an
Biggest contributor to UK Bank Levy
HSBC is the largest contributor to the UK Bank tax having paid more than a third of the £2.2bn raised since the levy was introduced. It paid $1.1bn (£750m last year and will pay $1.5bn (£1bn) this year. This is despite having smaller UK operations than the other big 4 banks (RBS, Lloyds, Barclays). This tax has risen seven times since it was first introduced. At that time it was said to be a one-off reparation payment for the role that the banks played in the 2008 financial crisis. However with the unpopularity of the banks (largely driven by the politicians in collusion with the media) the banks have been seen as a soft touch for raising further tax revenues by both Labour and Conservative governments.
Anti-bank sentiment
The Conservatives winning an overall majority in the General Election has not made the argument for remaining head quartered in the UK stronger. It was after all the ‘business friendly’ Conservatives who have just raised the Bank tax once again in the last budget. There is nothing to suggest that they won't raise it further when they need more money to either invest or pay off the deficit.
Time zone argument
One argument that has been made for why it makes sense for HSBC to locate its Head Office in London is because the UK time zone is ideal for both working with Asia (in the UK morning) and the US (in the UK afternoon and evening). However with HSBC shrinking its retail operations in the US, after the disaster that was Household, the need to be in the UK only becomes a necessity for the investment bank. Having the investment bank based in London does not mean that the Head Office has to be.
Ring fencing
A further argument for moving the Head Office out of the UK is ring fencing. Ring fencing is a way to structurally separate retail banking activities from wholesale and investment banking activities. It is due to be implemented by 2019 and is a UK regulation which differs from both the way that the US and the European Union intend to de-risk structurally significant banks. HSBC intends to only put its UK retail bank within the ring fence and the rest of its business outside. It is estimated that ring-fencing will cost banks in the region of £1.5bn - £2.5bn to put in place and then a further £1.7bn - £4.4bn per year to operate. This will be yet another significant rise in the cost of doing banking business in the UK. Since the element inside the ring fence for HSBC will be exclusively UK activities and relatively small, it would make sense, reduce costs and be less disruptive to at the same time as setting up the ring fence move the Head Office out of the UK. Not only would it reduce the overall set up costs (of separation and relocation), but it would also reduce the running costs of operating the ring fenced business.
Welcome back Midland Bank?
Of course once the UK retail bank is separated from the rest of HSBC by means of the ring fence it will not only make it far easier but more obvious for HSBC to sell off the UK retail bank given the inevitable decline in profitability in the UK business brought about by the changes to banking that the UK government (of whatever party or party combination) already plan to and will plan to introduce. HSBC have already announced that its retail bank head office will move to Birmingham in the heart of the Midlands. A cynic might think that the combination of the separated bank and the move to the Midlands will be steps towards the reversal of the 1992 acquisition by Hong Kong-based HSBC of Midland Bank. Good bye HSBC, hello Midland Bank?
Footnote: Should Labour get into government and abolish non-dom status relocating the Head Office back to Hong Kong would resolve that particular problem for HSBC CEO Stuart Sullivan (but of course there are a lot of far cheaper ways to do that!)
Posted by Jonathan Charley at 16:43 No comments: